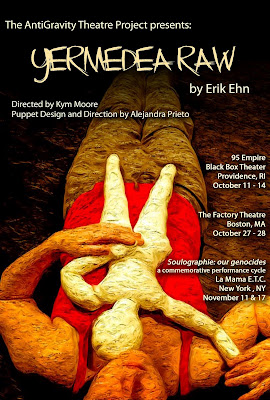 Welcome to the official blog for Yermedea Raw, written by Erik Ehn and directed by Kym Moore. This project has been in the making since spring 2010 and has already involved the cooperation of a number of dedicated scholars and artists under the auspices of the AntiGravity Theatre Project. The play will be performed at Brown University (September 20 - 30, 2012),  95 Empire in Providence, RI (October 11 - 14, 2012), and the Factory Theatre in Boston, MA (October 27 - 28, 2012) before arriving as part of the Soulographie Project at La MaMa in New York City in November 2012. On these pages, you will find the documentation of the evolution of this project as well as our dramaturgical work in progress.


Yermedea Raw is the first play in Erik Ehn's Central American series. The play specifically references the war in El Salvador. However, our research revealed that the devastation of indigenous cultures in Central and South America begins much earlier in Potosi, a mining town founded in Boliva in 1546. The colonial project devastated the region of its richest natural resources which included the mental, spiritual, and psychological life of the community. The silver mined in the hills outside the city made the Spanish and other Europeans exceptionally wealthy and left the indigenous people in ruins. The legendary city was known around the world as a "land of riches". Once the land was stripped of all its resources, legend has it that spirits lurked in the hills. Indigenous people in the area came to revere and even sanctify these ruins in myths and legends that survive to this day.


The composite character alluded to in the title is loosely based on Federico Garcia Lorca’s Yerma and Euripides’ Medea. The play braids Medea and Yerma into one narrative, in solidarity with the silenced. The nurse is guided by a mysterious Bus Driver that appears in what becomes a waking dream, one might even call it a hallucination. Save for the fact that this "hallucination" is real. Yermedea Raw explores the disturbing social and psychological effect on life lived in the midst of genocide. The women in the play contemplate the unthinkable moral question of infanticide as an alternative to seeing their children brutally murdered, raped, or otherwise destroyed by the ravages of war.


How to represent the unimaginable circumstances of war becomes the aesthetic challenge to our creative team. Ehn's play is written in a dense poetic language that invites the viewer into a liminal world that explores the intimate relationship between the tangible and intangible. Yermedea Raw is a hybrid puppet/theatre performance that incorporates the materials of theatre - sound, lights, space, time, movement, gesture, and image - to convey that which cannot be expressed otherwise. We aspire to stand with the strong voices of the silenced and hidden lives of millions in our own global community, while simultaneously opening our eyes to the profound psycho-spiritual horrors of war.

An integral aspect of this project (and one that is currently underfunded) is the education and community outreach effort. In order to spread awareness, engage the community and truly spark conversation about the play’s themes, members of the Yermedea team will teach workshops in Providence Public Schools and community organizations. These workshops will use applied theatre techniques to actively engage participants in the history of genocide in El Salvador and around the world. This will allow us to engage communities that might not otherwise attend the show, helping the project move beyond the stage (tickets to performances at the 95 Empire Black Box in Providence will be by suggested donation only to allow all interested audience members, regardless of resources, the opportunity to view and discuss the art). At the end of each workshop, participants will have the option to sign a living document declaring their awareness that genocides have occurred and continue to occur around the world.

Please consider supporting our project by donating to our indiegogo-campaign!!!