The Yermedea RAW cast and crew returned to New York City this passed weekend to not only take part in the Soulographie marathon on Saturday but to also perform Erik Ehn's play for the last time. It has been a momentous time, from beginning to plan the project in 2010, but especially during the months of rehearsals and performances at Brown University but also on our little yet extraordinary tour. Bringing our show to a variety of people and engaging with them afterwards has been a most profound and continuous experience. Thus, all of our team felt both elated at the thought that a such an intense project would come to an end at La MaMa E.T.C. but also sad to say goodbye to a wonderful group of people and a significant experience. 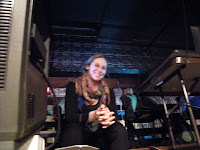 After making our way to New York late Friday afternoon and evening, we were set to perform in the first installment of the marathon after Everyman Jack of You and Diamond Dick and before Maria Kizito on Saturday afternoon. We were very happy to learn that our performance was sold out after the very enthusiastic reception of our performance the weekend before and the excellent review in the New York Times. Indeed, our excellent ensemble performed in front of a full house, composed of an attentive and vocal audience, who eventually applauded strongly, in part in standing ovations.
On Sunday, before making our way back to Providence, we loaded out of the space at La MaMa and bid farewell to the moving box, an integral part of our set design, which we left behind. 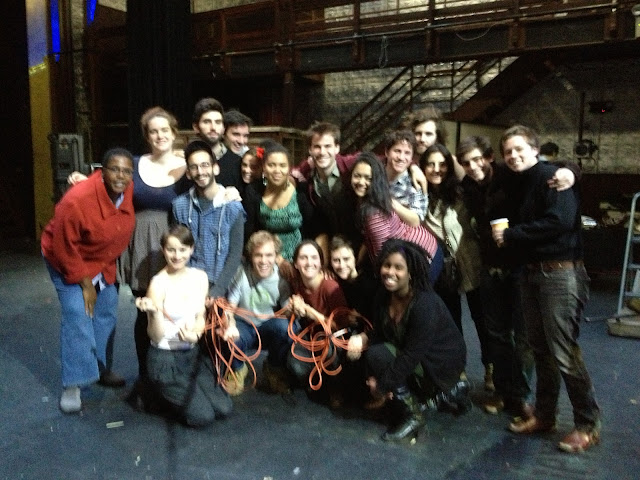 ~~~
Although the performance project of yermedea RAW has been finished, please check back with us often as we will continue to bring you more insights and highlights from the performances. We will also continue to use this blog to bring you news from Latin America and about issues we feel are pertinent to the legacy of yermedea RAW.
Eingestellt von Katrin Dettmer um 5:20 PM No comments: 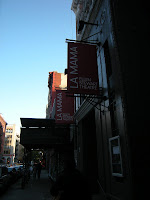 This passed weekend, we have finally reached the culmination of so many months of hard and dedicated work by many people - actors, designers, the production and creative team - in New York City, kicking off the Soulographie festival at La MaMa E.T.C. Our team traveled to New York on Friday night, loaded in and rehearsed on Saturday, and premiered Yermedea RAW during the opening installment of three performance, with Everyman Jack of You and Diamond Dick, on Sunday night. Please find below a text by Brian Cross, who is one of the puppeteers and the voice of The Driver, sharing his experience of the first weekend in New York. 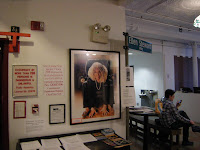 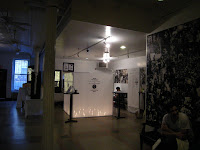 "For perhaps the first time throughout Yermedea's tour, a child of no more than six years sat among the audience on the November 11 performance at La Mama E.T.C. on E. 4th Street. I make her presence known to you because she made her front-row presence known to us: when two baby puppets bopped one another on the head, she giggled loudly as though she were watching Punch and Judy. Note, the complexity of the subject matter was not lost on her. Sure enough she held onto her mom during the scary bits, wading through the shades of the River Styx. Yet she seemed to remind the actors -- or me, at least -- of the levity of the piece, easily lost in the dense language of systematic death. Within the apocalyptic dreamscape of Yermedea hide infinite Easter Eggs at which one has no choice but to smile: singing and stitching, your child in your arms for a moment, a guardian angel that leads you into Hell and back again, the sound of bells, company. And really, for all the tragedy in the plays of Soulographie, it is to protect these moments of small joy that we pass on the tale of genocide. Tiny nuggets get us through our days.

And so, as Yermedea nears its close, I am thankful for the nuggets that got the team through its first weekend in New York. That our stress manifested itself in group love fests, that our production team worked as a well-oiled machine to keep the cast safe and happy in the city, that Ria (Soulographie Global Stage Manager) and Eric (Soulographie Global Producer) gave us their complete focus and support, that the cast could set the stage in seconds flat, that no one missed their bus to New York, that no one missed their bus back to Providence, that the sold-out crowd engaged with difficult subject matter, and that some parents take their six-year-olds to see experimental theater." 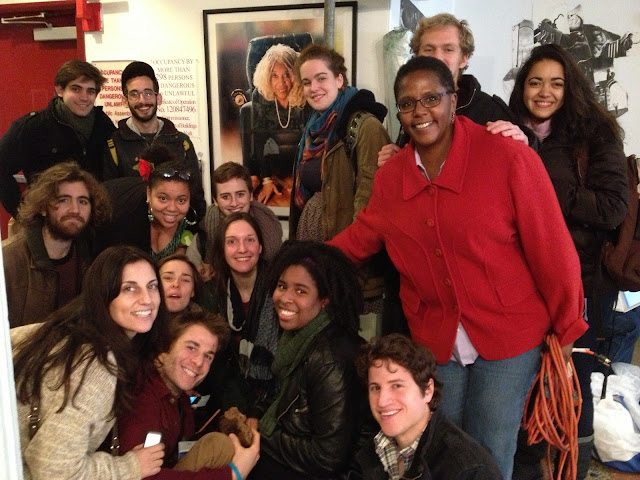 We are thrilled to report that the New York Times found our production "energizing and frightening" and full of "most haunting images". We are also thrilled that our very final performance in New York, this coming Saturday, 17 November 2012, is already sold out - although you can try to get tickets at the box office before the show. The entire team is thrilled to return to New York once more and step into the dreamscape of Yermedea RAW one last time.
Eingestellt von Katrin Dettmer um 2:21 PM No comments:

Yet another talk back with Erik Ehn 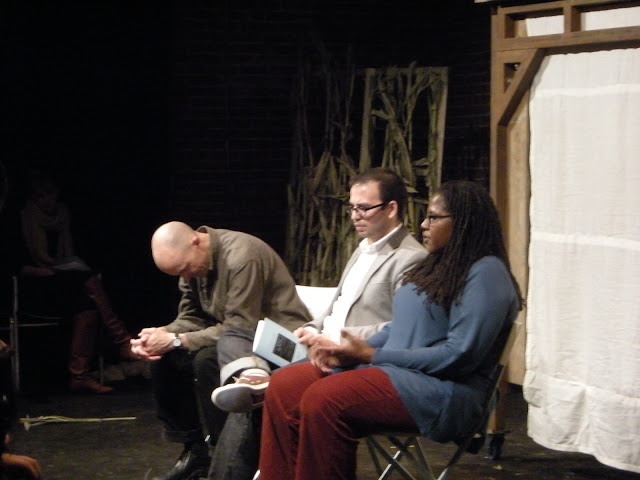 As we are less than a week away from the Soulographie: Our Genocides festival at La MaMa E.T.C. in New York City, we are reflecting on our journey once more and what we have learned, including from the very insightful talk back that followed our last show at Boston's Factory Theatre on Sunday, 28 October 2012.
Noe Montez, Professor for Latin American Performance at Tufts University, was joined by playwright Erik Ehn and director Kym Moore to talk about Yermedea RAW within the context of Soulographie. Erik started off by explaining that the idea for Soulographie was born out of the question of how to persevere though overwhelming crisis and damage. Noe noticed that through all regimes and oppression, women have been made into bystanders or the oppressed on a variety of levels as children have been stolen out of their wombs and they themselves have been subjected to often grotesque forms of sexual torture, thus being lost in an atmosphere of chaos and senselessness that also often came through in the play and the performance. Erik responded that the mission of genocide is to attack motherhood and to destroy knowing itself. He said that it was in fact his trip to El Salvador in the 1990s that served as the beginning of Soulographie as evolving around the issue of knowing. He related a story in which the army in El Salvador had killed almost an entire village and had buried the bodies in the center of the town, claiming the mass murder had never happened while making the fact that it had happened the center of the continuing life there. Thus, genocide is concerned with a reorganization of knowing into power structures. Noe added that while the official end of violence in El Salvador is dated in 1991, the violence does continue in regard of the organization of forgetting, bearing similarities to the Argentine Dirty War, as many of the country's Disappeared are only now reunited with their families. Kym emphasized that these instances also tie in to the 500-year-old history of genocide in the entire continent of Latin America, which was the inspiration to not only work through the Western mythological figures of Yerma and Medea but to also include indigenous mythology like the figure of Pachamama in order to establish this greater framework. 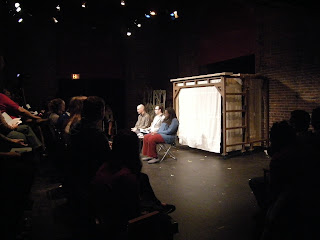 Noe then focused on the story and presentation as being visceral experiences with visual and aural moments that were like "a punch to the gut". He felt that the play was structured from image to image to which Erik responded that the play is backing away from you and leaves you in confusion to let you yourself figure things out: "Confusion is my happy place." Kym disagreed and stressed that she is in love with how images communicate, while she also stressed the importance of music and sound as well as the physical choreography to create these moments of the images. Kym then paid respect to Ellen Stewart, founder and director of La MaMa E.T.C., and how she influenced Kym's understanding of theatre as communication, which transcends languages and cultures. Erik's play was in this sense a challenge to Kym since it is all images to begin with, which let her revisit some of her questions about how we communicate and how we can know something, all in all trying to make a happy marriage between confusion and knowing.
Closing, Noe asked about the collaboration between Erik and Kym. Erik expressed that it takes a lot of trust to give the play away but also that this is the nature of the play cycle, which goes beyond something personal although all his writing is very personal experiences and his biography: but he loves to give away something of meaning to himself. As the playwright absents himself, the script is also meant to fall away as the production is the actual shape of the piece. And eventually, the production will have to fall away as well as the audience has to take over the piece and fill it in. Kym stressed that from the beginning the piece has been bigger than everybody involved, gesturing beyond the page and beyond directing. 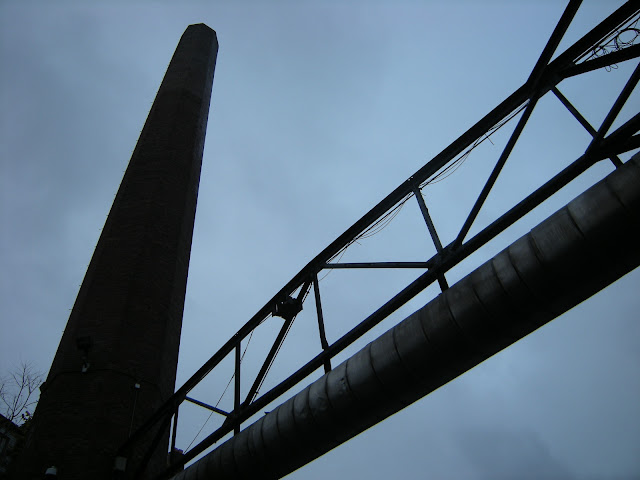