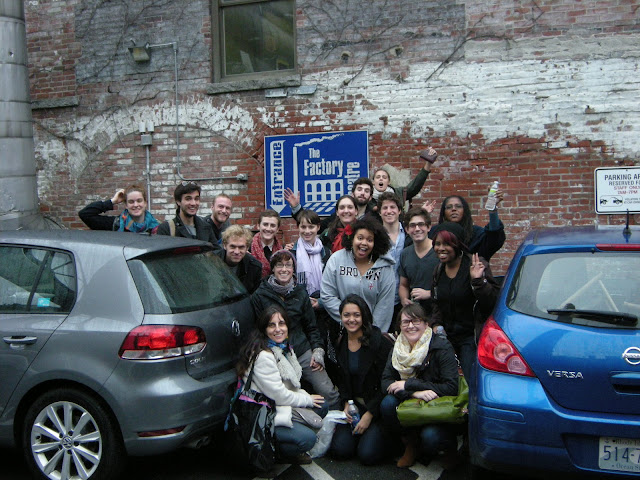 This past weekend, the production of yermedea RAW embarked on the second part of its tour to perform two sold-out shows in Boston's Factory Theatre with the help of the phenomenal Sleeping Weazel artists' collective. 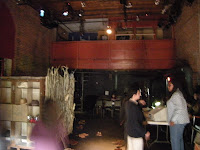 For both nights, we shared the stage with Vacant Lot Theatre Company's production of Equiprobablism, another play by Erik Ehn of his series entitled A Child's Drawing Of A Monster, directed by Kathleen Amshoff. As we realized that the venue of the Factory Theatre is even smaller than at 95 Empire Black Box, cast and crew once more set out to make it work and adapt our production to the new space. Just as at 95 Empire, the confines eventually proved to be a blessing as they enabled us to discover the work anew and intensify some moments even more, which all in all resulted in two very powerful performances. 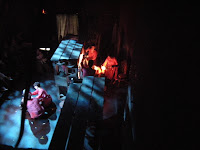 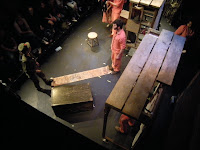 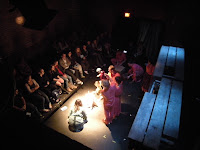 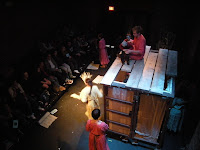 The premiere was followed by a talk back with the directors, Kym Moore and Kathleen Amshoff, and artist Robbie McCauley. Robbie started off the conversation by praising the strong images of the production that brought her to reconsider the question of whether genocide is a natural and normal activity for humanity and how it could have been going on for centuries. She emphasized that it was theatre work like this that lets us stop in our tracks to consider these issues in the first place, all coming down to the fundamental question: Who are we? Kathleen stressed that Erik's writing is always interested in asking questions that cannot be easily answered. His writing may seem very oblique as it in fact is always coming from the side. A member of the audience related that although the images were stark and overwhelming, she did feel hopeful towards the end. Kym agreed that in spite of all the carnage, there is also life and survival and hope. It is above all in working with young companies that she is reminded of this hopefulness and the fact that humanity can do better than engaging in genocide. This becomes also very palpable with the figure of Pachamama in the show, which was early on incorporated by Kym and Alejandra Prieto. Not only is Pachamama the revitalizing force but she also stands in for the survival of women, who are not just victims but survivors, who are constantly coming back. Robbie connected this to Obatala, the dying and rising god of the Yoruba religion, that embodies faith in renewal and spiritual hope that is part of the feminine in everyone, which she also saw as the basis for the figure of the Driver, which Kym confirmed. The feminine, which resides in both men and women, is in this way an undervalued energy that is not supported by society, especially when this nurturing quality becomes apparent in men, who are too easily perceived as the sole perpetrators. Kym expressed that rather than an inherent duality, the opposition between the masculine and the feminine is a concept that is put onto us. 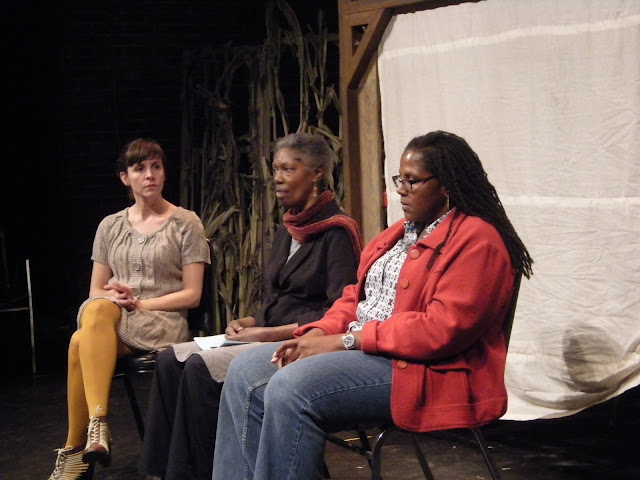 As another member of the audience asked about the scrolls that were used in the production, Kym remarked that although her family originally comes from Central America, she had little knowledge of the continent's history and especially the history of genocide there before starting this project. The scrolls and the Mayan script they display call into presence the vast number of stories that have been repressed or are not readily available in the West's version of history. Sleeping Weazel's Charlotte Meehan made a case for theatre that brings the stories of people to light, who are not seen - for to tell a story and thus to keep a people is also a joyful activity, even if the images may at first appear brutal and overwhelming.
Another audience member remarked that she often felt foreign to the experience of the performance and that she observed a historical dislocation. While at times she felt sympathy, at other points she felt extremely other and foreign. Kym mentioned that we may sometimes get over-concerned with identifying everything, which can get into way of actually seeing what is going on. Kathleen added that it is also Erik's poetic language that keeps you falling into and out of the story, which in fact asks a lot from the audience in terms of different forms of attention. Robbie then stressed that she often feels that audiences are underestimated and that theatre and art in general should put more trust in its audience to come to the work in their own time, whether it is during the performance, after the performance, a week later, or in their dreams.

Check back later this week for a report on the talk back with Kym and Erik in Boston!!!
Eingestellt von Katrin Dettmer um 11:45 PM