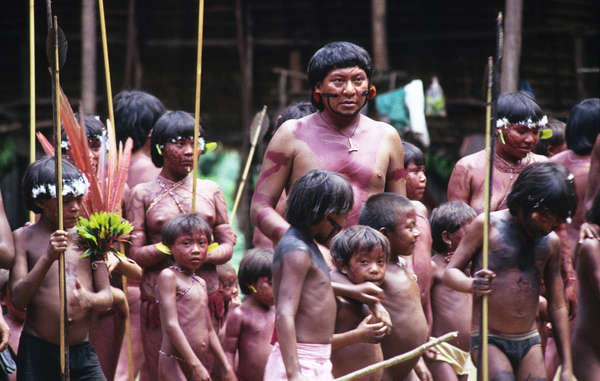 The BBC has recently picked up a news item from Survival International, an organization who works for tribal peoples' rights worldwide. They already reported in late August that there had been a massacre of a group of the Yanomami Amazon tribe in Venezuela by illegal gold miners. While Survival International has since then stated that they were unable to confirm this massacre (read about it here), they also stated that the story of the incident has with all likelihood spread from similar attacks earlier this year. Since the Yanomami are a rather isolated tribe of about 32,000 people, living in the rainforests and mountains of northern Brazil and southern Venezuela, it is sometimes hard to verify reports in a timely fashion. Nevertheless, the history of abuse of the land and attacks on the tribe by illegal gold miners in the area has been documented for years now. Both Brazilian and Venezuelan authorities have failed to remove the illegal miners and to limit the expanding cattle ranches into indigenous territories, which not only pollute and destroy the land but also endanger the lives of the Yanomami by bringing disease and violence to their territory. In fact, there are several mining bills in the works that would allow for an intensified exploitation of Yanomami land. In response, the Yanomami organization Horonami has issued a statement last week that urges the Venezuelan government to tackle the ‘presence and impacts’ of illegal gold mining, rather than deny the problem exists. Furthermore, they ask for a proper investigation of said massacre, admonishing the Venezuelan authorities and military for pretending that everything is well in the region.

Watch a video with Shaman Davi Kopenawa Yanomami, who speaks about what the proposed mining bill in Brazil would mean for his people.