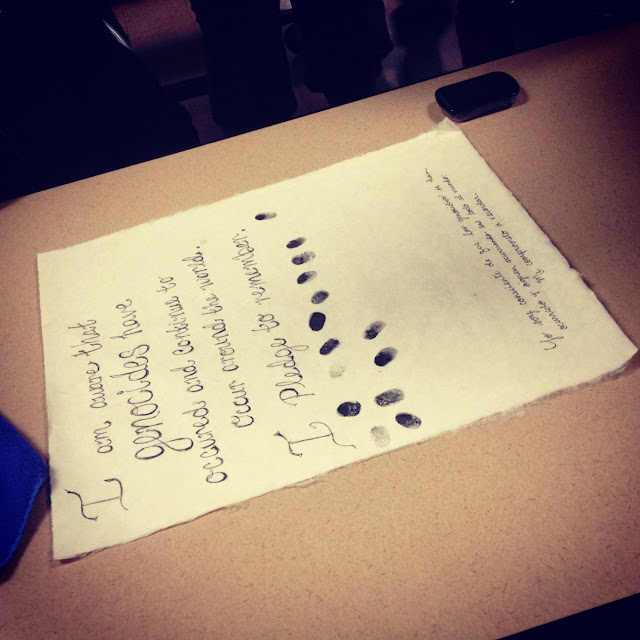 As the production took one week off before getting ready for the first leg of our tour at 95 Empire in Providence, we have been keeping busy in various ways, most notably in our outreach efforts. Below, please find a contribution from performer Alejandra Rivera Flaviá about these inspiring ventures.


“People think these are stories. They’re not. They’re real,” she said slowly. Although I could see it had taken her time to find the words, the message had been sharp in her eyes, in the universal language of human intention, since before she began to speak: I need you to understand.

She was from Rwanda, where her family continued to reside and suffer the realities of genocide, and she had approached me and my fellow cast member, Becky Bass, in the cafeteria of William D’Abate Elementary School on what, up until then, had seemed to be a not-so-special Tuesday. We were picking up after the Yermedea workshop we had just helped facilitate, in which we had explored the history of El Salvador through theatre with men and women of the English for Action program. Throughout the process, I was surprised to realize that she was not the only one who was moved to share her story. In fact, I was surprised (and surprised to be surprised) to see how much people were moved to begin with.

On the first exercise, the class was divided into groups of three, and each group was given a prompt that delineated an occurrence within the history of El Salvador; they were asked to create a tableau that represented the event. My group, composed of a young man in his mid-20s and a man and a woman who could have been in their late 50s, was given the prompt of “scorched earth,” which was a strategy that the Salvadorian government employed in 1981, which consisted of destroying anything that could be useful to left-wing guerrillas. And what was the most useful asset to these revolutionaries? The support of the people. So by “destroying anything,” I mean "destroying the people." 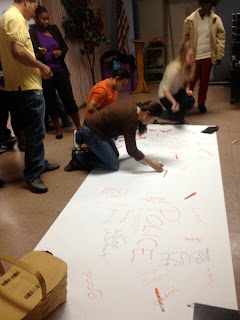 The small paper that my group was given described the atrocities associated with this tremendously cruel military policy, such as the burning of houses, the raping of women, and the murdering of an immense number of people. As soon as we finished reading it, I looked up to find the three students frozen. Feeling quite uncomfortable myself with the idea of embodying such a violent event, I initially chose to suppress my uneasiness for what I believed to be the sake of the exercise. “So, what ideas do you guys have concerning the prompt?” I asked. Silence. Faces stared at me blankly. Maybe they didn't understand. I needed to change my tactic. “Do you know what the word ‘genocide’ means in Spanish?” I continued. This time, there was no silence. The word “yes” emerged from their mouths, loud and sharp, almost before I could finish my question. I remember realizing how arrogant I must have seemed when asking that condescending question... See, I had arrived there with the understanding that I would need to help them cross a bridge from Spanish to English. As I have personally experienced from years of helping many adults to learn English, this bridge can often feel clunky and difficult to traverse, especially as we grow older, which is why the idea of a “language barrier” that prevents us from doing so has become such a popular image (as well as, unfortunately, an excuse to not try to understand). Despite of this barrier’s presence in my group when it came to language such as “right wing,” “felony,” and “indictment,” the second that I inquired if they needed help with the word “genocide,” such a collective reaction was a quick mutual agreement between the four of us that we all knew exactly what that meant. Thus, when it came to human pain, there was no such thing as a language barrier.

One of the men raised his finger in a gesture that signaled that he would be right back and proceeded to go over to Francesca, the workshop’s main facilitator, to explain the fact that these brutal events were close to his heart, making it difficult for him to perform the exercise. That was when I realized how counterintuitive it was of me to repress my own visceral reaction to the prompt. By doing so, I was inhibiting communication rather than fostering it, because—ultimately—that feeling of discomfort, that reluctance to mentally place ourselves within such a unbearable scene, that alliance with our weakness that allowed us the strength of accepting that we simply could not take it—that was the language we all shared. That was the language that would ensure that we would all indeed cross the bridge. And together.

I took a deep breath and said, “You know, I feel pretty uncomfortable doing this one. It’s very painful, so I don’t think we should do it directly.” What a release that was for them, I could have never imagined. As soon as I acknowledged this, it felt as though the picture unfroze. They began breathing again, which made me realize that they had been holding their breath to a certain extent since they had read the paper. Now they nodded warmly, with sighs of relief, spoke to me as a fellow human being and not a distant intruder, and I felt as though I was finally part of the group. 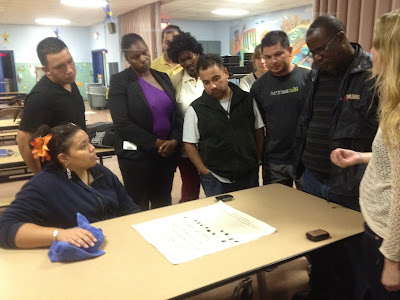 We decided that, instead of making a tableau of the actual event, we would make one of the counteracting force to such atrocities: compassion. Without much help from me, they joyfully began playing with ideas until they quickly made a beautiful picture. The older man was on the floor, while the woman reached her hand out to him, offering her help. The younger man put his head and his hands on her shoulder. I was very compelled. I felt very human. My mother had once said to me, “You are, first and foremost, a creature of the earth, so if you ever feel lost or disconnected, take your shoes off, and walk in the grass.” This time, working with the group, I didn’t have to remove my boots. Looking at the image they created made me feel my feet on the ground. It reminded me of why we are doing Yermedea in the first place, of why someone like me—a young college girl whose closest experience with physical abuse was the occasional slap from the kindergarden bully—has the capacity and the right to represent the pain of those who have suffered crimes against humanity. It reminded me of the simple and majestic fact of human connection, and how it is ultimately the only “cure,” if one may call it that, to genocide.

As a closing action, we all signed (with our fingerprints) a contract that validated our commitment to acknowledging, to remembering the fact that genocides have occurred and continue to occur throughout the world. As simple as this may have been, it made an impact. On something. Perhaps inside of us, perhaps not, but somewhere and somehow. You see, it’s easy to feel small. It’s easy to step out of rehearsal and emerge yourself in the bubble of what you consider to be your own world. It’s easy to believe that there is nothing you can do for those whose plight you cannot see or understand, but the truth is that when it comes to the desire of making a difference (any difference), “your own world” is merely an illusion. The world belongs to us all, and because “le monde est petit,” each thought looks pretty large in proportion to it. In fact, each thought is large to begin with. Kym Moore, our director, once told us as a cast, “I don't think you as actors are aware of how much exists in this world because of a tiny impulse you had that suddenly grew into a full blown moment that currently exists here in three dimensions.” I don’t think we as people on this planet are aware of that either. 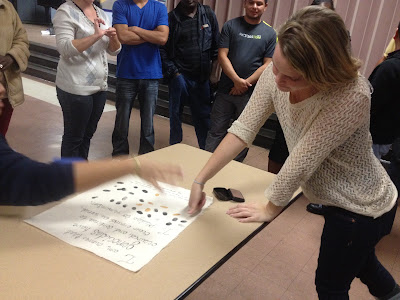 So come see Yermedea even if you can’t fly to El Salvador to rescue the women whose stories we want to tell you, vote in the national election even if you only think of yourself as one in 300,000,000 people, and keep making things happen by the sole act of existing. Because you are indeed making things happen. And if you ever feel lost or disconnected, take your shoes off and put your feet on the grass, or help facilitate a workshop, or recognize the impulses that inhabit your body in this very moment. Or simply remember that it’s not true that you are disconnected at all, that your ability to think about what is happening to people throughout the world is in fact your connection to these people. Your thoughts are, just like the stories the people in our workshop needed to share... real.