An excerpt from the 1995 production of Heiner Müller's Hamletmachine by the Argentine group El Periférico de Objetos. You can read a review of a performance for BAM in 2000 here.

Mujeres de la Guerra, Historias de El Salvador (Women of the War, Stories of El Salvador) is an inspiring project by Lyn McCracken and Tedde Simon, which documents the lives, stories, and work of twenty-eight women leaders in El Salvador. Through a documentary film, photography exhibits in both the US and El Salvador, and a photo essay book, they hope to provide these women with the opportunity to tell their inspiring stories and share their hope, wisdom, and dedication with the world as these women now work for peace and justice in El Salvador, which in many cases began with the repression and injustice caused by the Salvadoran civil war. On their public funding site, Lyn and Tedde talk about the women they interviewed:


"The Salvadoran Civil War (1980-1992) claimed the lives of over 75,000 innocent civilians. An additional 8,000 Salvadorans disappeared. Many thousands of families were forced to abandon their homes and flee from horrific violence, the majority of which was carried out by US-backed military and death squads.
Before the war, these very young women saw the need to organize with their communities in defense of their rights. As the repression and violence worsened, some women helped their communities and families to flee, to refugee camps or the remote mountains. Others joined the insurgent guerilla forces, as cooks, as medics, in radio communications, in press and propaganda, and taking up arms to fight for their rights.
The women tell stories about losing their homes, their family members, the scorched earth campaigns – losing crops, livestock, food and livelihood – the massacres, the repression. Fleeing with their children into the mountains, suffering from hunger, fear and tropical storms.
Their stories are painful, hard to hear.
At the same time, the war was a school for many of them, a place where they learned to read, write, and find their voice. Today, these women organize their communities to create opportunities for everyone, to work for access to basic rights, to empower women and teach young people. Their courage, resilience, and perseverance, their hope in a better tomorrow, their ability to “seguir adelante,” continue forward in even the darkest of times, are deeply inspiring."

One of these women, Maria Yolanda Garcia Vigil, and her story is featured on the Voices from El Salvador blog, which directed our attention to this project in the first place. The story Yolanda tells is unbelievably brutal at times:

"My grandmother was hung. They hung my grandma. And they shot her. She was buried by my mom, more or less, on the spot. And my mom, too. They found her with eight kids in a house. My mom was tied up, all her teeth were broken from being kicked, she was blindfolded and beaten. They tried to kill her by beating her."

While Yolanda shares her story and her memories, it also becomes clear that her focus in doing so is the future and the improvement of the situation for women in El Salvador but also on a global level:


"These are real things, these aren’t things from a movie, but things that we have lived. And things that haven’t been easy. Our struggle has been of a lot of sacrifice, of blood, of so many martyrs that have given their lives in this history. We will construct our future together. The problems that we face in our country aren’t just here; the crisis is on the global level. And everywhere, even in the United States, there are people that are organized and fighting against injustice."

You can read Yolanda's complete story here. Please also watch this fantastic teaser for the documentary film and help Lyn and Tedde reach their goal if you are so inclined.

Also very moving in their simplicity and tenderness are the songs from the time of the war sung by Marina, which Lyn and Tedde captured for the project. In this song, Marina sings about a mother who has to tell her four children that their father is dead. “He fought for the people that he loved,” she tells them. Listen to the entire song, and others sung by Marina on vimeo. 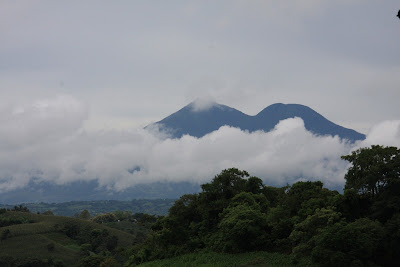 El Salvador has been the starting point and inspiration for Erik Ehn's Yermedea, which relates to its poverty currently and over the course of colonial history while also paying attention to the entanglement of the US and other colonial forces. Although Kym and Alejandra have extended their conversation towards all of Latin America with a particular interest in the indigenous peoples all over the region, the landscape of El Salvador with its mountains and waterfalls seem to speak specifically to our desire to incorporate the idea of Pachamama, the Mother Earth or Mother World, despite the fact that she is a goddess usually revered by the indigenous people of the Andes. Additionally, the images in this video, of El Salvador as Paradise, also seem to translate into a theatrical vocabulary that may serve us well. There is something about the fog and clouds and the way they obscure and/or penetrate the environment we may want to investigate.

On the other hand, the image of these waterfalls may also gesture towards images of waterfalls of blood (possibly constructed in red string or some simple material as design component for Yermedea), since such a beautiful place has also produced incredibly bloody, unimaginable torture, murder, and rape: Paradise and Hell may be the same place after all. Below, please find two documentaries from the 1980s that cover the civil war in El Salvador at that moment in time. The first one, Names of War (1984), focuses on everyday life during the war and features a lot of interviews, also with child fighters. You can also find the filmmaker's journal of the trip here.


The second documentary, In the Name of the People (1985), is a feature-length film, narrated by Martin Sheen, and follows the lives (and deaths) of guerrillas and peasants in the liberated areas of El Salvador and details the problems of daily life and military actions.

Women, War & Peace is an extremely powerful five-part special series, which we showed an excerpt from during our info session in May. It was produced by THIRTEEN and Fork Films, funded by a multitude of international supporters, and aired on PBS in October and November of 2011. The series covers stories of women caught up in war and fighting for peace all over the globe. All five episodes are worth watching (and the official website supplies more great material and follow-ups) but we especially recommend these three episodes:


Watch Pray the Devil Back To Hell on PBS. See more from Women War and Peace.


Watch The War We Are Living on PBS. See more from Women War and Peace.

Please watch these two videos of pieces by Ana Correa and Augusto Casafranca of Grupo Yuyachkani, a Peruvian theater group formed in 1971, as featured in Acting Together on the World Stage, a documentary film that highlights courageous and creative artists and peacebuilders working in conflict zones. Having grown out of a five-year initiative of Theater Without Borders, Brandeis University, and filmmaker Allison Lund, the film features theatrical works and rituals that reach beneath people's defenses in respectful ways that support communities to configure new patterns of meaning and relationships. Thus, these videos may give us more clarity around what Erik is trying to do with Soulographie in general and they also may help to inspire your own aesthetic impulses moving forward.
Both videos provide a profound yet theoretical basis for our work in progress, a key concept being the question of what is gained from the act of re-telling/witnessing a story or the many stories of people we have never met and we initially may feel have little in common with us.
These videos can also help you understand the experience some of you had in the first two workshops for Yermedea with respect to audience responses. It's absolutely okay for us to enter this work without certainty about the final "outcome." Something else is at play and these two videos allude to that fact.

What happened at Dos Erres 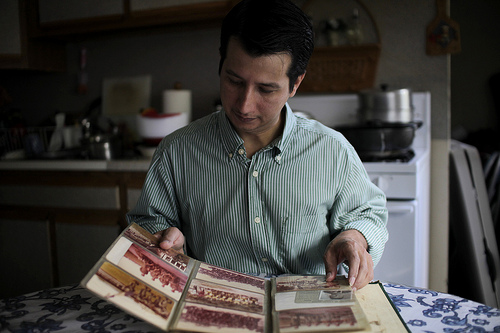 Recently, This American Life aired an incredible program about the massacre at Dos Erres. It tells the story of Oscar Ramirez (pictured) and how he discovered that he is in fact a survivor of the massacre carried out by Guatemalan military in the village Dos Erres in 1982. After investigators and anthropologists followed up on some rumors of a well filled with bodies, they discover at least 162 bodies, 67 of those victims had to be under 12 years old with an average age of 7. By and by, the events of Dos Erres are uncovered.


Please be advised that this program contains reports of extreme violence. Yet, it is important to listen as this program shows how people are connected and disconnected throughout history, how the dead are still bearing witness to past atrocities and call unto the living, how the verbalizing of violence in the frames of witnessing by victims but also of confession by perpetrators still has a physical impact after many years.

Listen to the story here. This program was developed in cooperation with ProPublica who feature the story "Finding Oscar" with photos, videos, and a timeline. Read it here.
Eingestellt von Katrin Dettmer um 5:57 AM No comments: